7 Photography Projects to Jumpstart your Creativity

Let’s face it, no matter how much we take our camera out, there’s only so many pictures we can take of our kids, pets, house and garden before we start itching to shoot something else… but what?

Hopefully this list of projects you can undertake will inspire you to find something creative to shoot.

The most popular of the projects on this list, there are multiple variations of the 365 project. Typically, it involves taking a self-portrait every day for a year – the only rule is that you have to hit the shutter button (or remote) and at least some part of you must be in the photo. It doesn’t sound so bad at first, but believe me, there’s only so many photos you can take holding the camera at arms length before even you get bored. Suddenly you find yourself doing things like wrapping yourself in christmas lights, jumping in piles of leaves, or taping your mouth shut. For inspiration, check out the 365 Days group on flickr.

If a photo-a-day seems like too much of a commitment, you can do one self-portrait a week for a year – a 52 Weeks project.

If the self-portrait part makes you a bit squeamish, you can either round up the kids and get pictures of them everyday for a 365 kids project, or you can just do a open-topic 365 project where you just have to take a picture of anything every day for a year.

I use the term “photowalk” pretty loosely here. While photowalks often include groups of people walking through cities together, all capturing images of the same landmarks from their own point of view, I’m being slightly more liberal with the term.

Basically, I’m saying you should get out of the house once a week with your camera.  I looked through all my photos from my first year with my DSLR and realized about 90% of them were in or around my house. So I got up and walked out the door once a week. I’ve been to local parks, abandoned buildings (careful with this one: it can be frowned upon or even illegal to poke around some abandoned buildings), downtown and other small towns near me.

Besides adding a bigger variety to my photo collection, I’ve noticed two other side effects from this project so far: I’ve discovered all sorts of parks and areas of downtown that I didn’t even know existed, and I’ve been able to go to places that I already knew and see them from a totally different viewpoint. For instance, the picture above is of a local amphitheater. I’ve been there a number of times and never thought much of it… but being there when the park was empty, and walking to the back of the stage looking out has given me a completely different perspective.

This is a project I personally don’t have the guts to do, as I’m bit shy (that’s the whole reason why I’m behind the lens to begin with!), but I know some people doing this project and I’m loving their results so far. Â The idea is to approach someone you’ve never met before, ask if you can take their picture, and talk to them a bit to get some kind of backstory, and then upload the photo (and a short description of who they are and what you talked about) to flickr and add it to the 100 Strangers group. Then repeat 99 more times.

Not only will get photos of different people in your collection, but you just might make a new friend or two. You can, of course, skip the flickr part and do this project on your own, but you would gain a lot of inspiration from the group.

Once again, there’s a couple ways you can go with an A-Z project. You can pick a place and try to get a picture of objects that start with or represent each letter of the alphabet (for instance, it might be easy to take a photo of the grass for G, but Q is going to be harder, maybe a picture of a kid running around could be Quick, or a picture of a completely still pond could be Quiet). You can also try this with numbers, too – take a photo of one acorn on the ground, two ducks by a pond, three trees grouped together, etc.

The other interpretation of this project is to take pictures of things that look like the letters A-Z. Take a look at the photo above, it’s actually a chain to a porch swing, but the one piece looks like a letter S. Once you start this project you’ll start looking at ordinary things – buildings, cloud formations, playground equipment, etc. – in a complete different way, giving you a new perspective on things to photograph. This project can also be done with numbers, too.

Pick something and try to get a collection of photos representing it. For instance, pick a color and try to go all day photographing only red things, or try only getting pictures of things that are square when you’re on a walk. I was once at a cookout and, while I took photos of other things, I also tried to get Â photos of people’s shoes.

The upside of this project is that it, once again, gets you to start seeing ordinary things in different way – taking a snapshot looking down at everyone’s shoes is going to start to get boring, so it forces you to start thinking creatively. The downside of this project is that people are going to start giving you weird looks for crawling around on the ground taking pictures of shoes while everyone else is enjoying hamburgers and potato salad.

During my 365 (open-topic, not self-portraits), I decided to take one month and do all my photos in black-and-white. My goal was to get better at converting photos to black and white, which I think I did, but I noticed I was also starting to see things differently, and figure out what photos would look better in mono, and which ones wouldn’t.

There were also a few surprises, like the leaf with water drops on it that you see above. If I hadn’t been doing a month of mono, I would have edited that photo in color and loved it, and left it like that. But I converted it for my 365 project, and I loved it even more. Surprises like that made the whole month worth it.

A photo scavenger hunt is simple. You need someone to come up with a list of things to photograph (they can be actually things like “railroad tracks”, or they can be more conceptual like “fun with friends”, or even techniques like “shallow depth of field”). Then, a group of people all go out and interpret the list how they want and show them to the group. As with a lot of the other projects I mentioned, it really gets you to start looking at ordinary things in a different way. Looking for a list? Do a search in the flickr groups for “scavenger hunt” and you’ll come up with a number of groups that have hunts going on. Including a DPS Scavenger Hunt group, made up of other DPS users that posts a new list each month.

This entry was posted on March 28, 2014 by Kai. It was filed under Uncategorized . 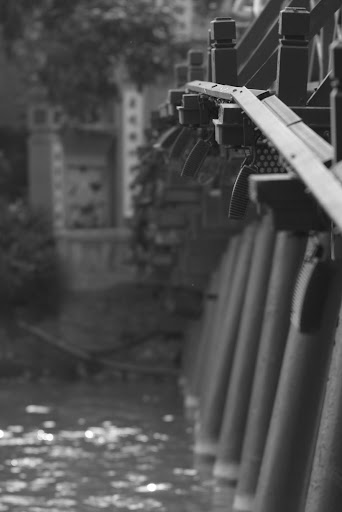 Chuyên mục to to